Skip to content
Get Found. Get Clients. Get Momentum.

How to Write a Performance Improvement Plan for Behavior [w/ Sample]

It’s an unfortunate reality faced by employers across industries: Sometimes, you have a difficult employee whose negative attitude is causing conflict with other teammates or even clients and damaging the workplace environment.

Occasionally, the employee is facing an external problem or stressor, and by giving them patience and grace, they can work through it and improve their professional performance on their own. Other times, the problem persists.

Your responsibility as a manager is to address the adverse pattern of behavior and work with the employee to identify tangible steps toward improvement before the issue noticeably damages your workplace culture, reputation, bottom line, or all three.

When to Use a Performance Improvement Plan (PIP)?

Often when you notice an issue with an employee’s attitude, the first step is a conversation to uncover what is causing the issue. This gives you a chance to assess whether they are dealing with an external stressor or mental health struggle that’s causing their bad attitude at work. If that’s the case, you may be able to point your employee toward resources—offered by your company or community organizations—to address the root cause of their stress. This initial conversation may include a verbal warning, but you want to ensure your tone remains focused on solving the problem with the employee rather than giving them the feeling you are an adversary to them.

If they’re simply struggling to perform at the level expected by your business, and verbal warnings, additional training, and other performance improvement measures don’t seem to fix the problem, the next step is developing a Performance Improvement Plan (PIP). This formal document should concisely state the problem with concrete examples and then outline clear and attainable steps for improvement. The best way to ensure you are giving concrete examples is to document the examples as they occur for review during a one-to-one meeting. You should only use PIPs when there is a pattern of poor behavior or repeated mistakes that amount to a larger concern—not as a solution to a one-off problem.

“There’s a Russian anecdote about a guy who has to amputate his dog’s tail but loves him so much that he cuts it off an inch each day, rather than all at once. His desire to spare the dog pain and suffering only leads to more pain and suffering. Don’t allow yourself to become that kind of boss!”

Some people view a PIP as a sort of probationary period, while others perceive it as a potential prequel to termination. Having a written document is critical to both serving your employee and helping them become a stronger team member while also protecting your company in the event you have to terminate employment.

Since PIPs do have a reputation for preceding termination, you need to be prepared to address the elephant in the room when you review the PIP for the first time. Again, this shouldn’t be the first time the employee is hearing about the problem, but when the document becomes formal, you can be introducing a level of uncertainty, doubt, and fear with the employee.

How to Write a PIP for Negative Attitude

It’s easiest to write a PIP for poor job performance, assuming you have clear job descriptions already standardized and made clear with all team members at your agency.

What is harder to do is to write a PIP for attitude related behaviors that you know are causing issues at your firm, but can be argued as a subjective case. You can counteract this subjectivity by ensuring that your agency has a set of organizational core values that are clear, concise, and well known by all team members.

Usually behavior issues come down to a lack of respect and it’s your responsibility as a leader to help the team member learn to respect the person, the role, the client, the task, or whatever it is they are disrespecting in order to keep their seat on your team.

The first step to putting an employee on a performance improvement plan is developing the document. Regardless of the offense, your goal is to make the PIP specific and measurable, especially when the feedback could be perceived as subjective.

A PIP for behavior should include the following at a minimum:

1. An identification of the problem

Be clear about the issue you’ve identified. It could be unprofessionalism, failing to participate in team meetings, a lack of attention to detail, a nonchalance about missing deadlines, abuse of power towards other team members, mishandling of client interactions, a general degradation of the company’s mission, brand, or values.

One common theme in the high stress environment of marketing agencies is a bad attitude or maladaptive behaviors that lead to negative interactions with clients or other team members. Whatever the problem, make sure you’ve articulated it as something fixable. When writing your PIP, ensure you are aiming the criticism at the behavior rather than attacking the person. 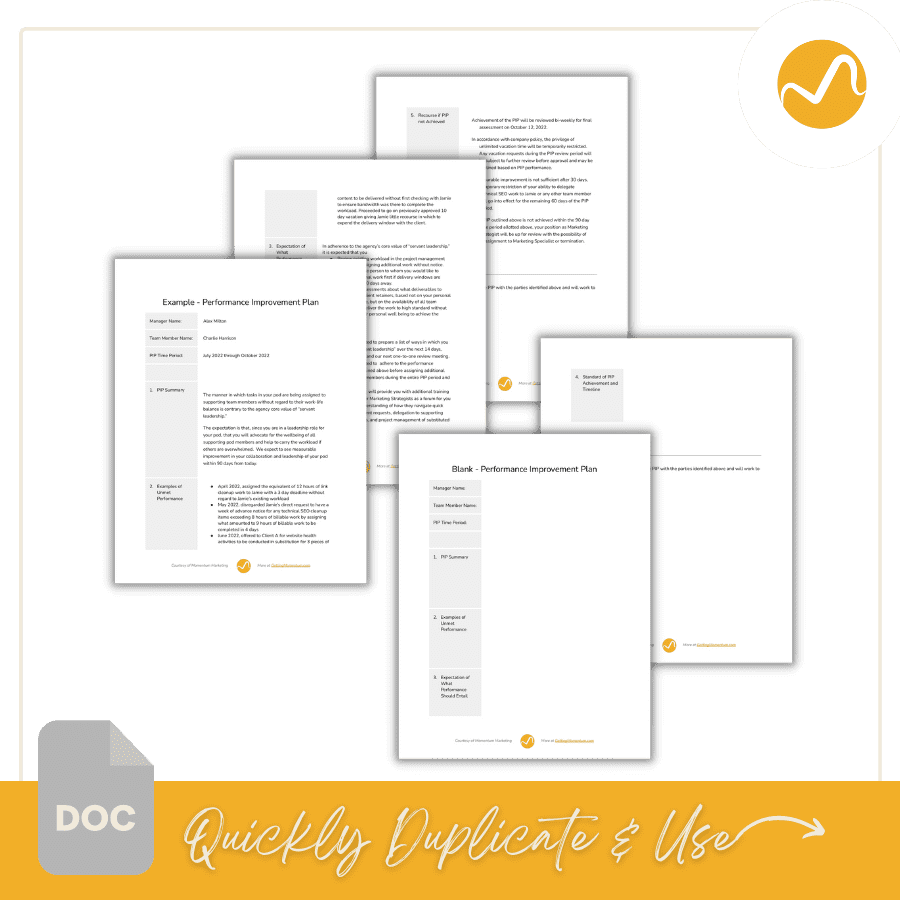 Simply submit the form below to access a Google Doc with a complete Performance Improvement Plan Sample and a PIP Template that you can quickly duplicate and use today.

Here’s one example of how you might frame a PIP for poor behavior towards supporting roles:

“The way tasks in your pod are being assigned to supporting team members without regard to their work-life balance is contrary to the agency core value of “servant leadership.” The expectation is that, since you are in a leadership role for your pod, that you will advocate for the wellbeing of all supporting pod members and help to carry the workload if others are overwhelmed. 30 days from today we will look to see that supporting team members’ clocked hours are more in line with agency standards. You are expected to prepare a list of ways in which you embody “servant leadership” over the next 30 days.”

Every PIP should provide specific examples as compared to the standard and expectations that are to be clear among agency team members. For instance, you don’t want to simply put, “X employee has a bad attitude,” and leave it at that. It’s unclear and it’s a personal attack.

Instead, cite the exact situation of the offense and explain why the offense is contrary to your agency’s core values. Again, specificity is key when you’re identifying a bad attitude.

Stick to the facts rather than a broad description and ensure that these offenses are oft repeated and have been verbally addressed multiple times before without change before preparing a formal PIP.

3. Make clear what the behavior should look like instead

One of the best ways to keep each team member aligned is to have a set of core values that you come back to time and time again.

Here are a few examples of core values from marketing agencies:

For example, if you have an employee whose behavior is consistently reactive, rather than proactive, and that behavior is creating friction within the team and your clientele, you can address the behavior by pointing to your core value of being proactive and then getting clear on specific ways for that role to be more proactive, such as reaching out first, giving clients ideas and recommendations, looking for possible issues to solve for before they become a problem, and the like.

What are your expectations for the employee when they’re at work? What does improvement look like and how will it be measured? The answers to these questions should be clearly communicated in your PIP. You need an attainable end goal that will demonstrate the employee has regained their standing at your company and is ready to go off the improvement plan.

Sometimes it is tempting to use a PIP when your full intention will be to fire the employee anyways. When this temptation is guiding you, setting an unattainable improvement goal without the proper support in place to help the employee achieve that goal is disingenuous. Remember, your role as a leader is to support those around you, not just boss them around to do your bidding all the time. Work on enriching those around you and being fair in what you are asking the employee to do to improve.

You may also want to include milestones based on the nature of the problem and restrictions you have to put in place. For example, if they’re having a bad attitude with customers, you could set a time period where they aren’t able to take on new projects or need to be monitored by a supervisor when they’re with clients until they show improvement.

The same goes for attitude problems manifesting internally. You could restrict their responsibilities or interactions with certain team members until they meet certain goals. For example, if they are abusing their power to delegate technical SEO work by giving little notice and too much work in too little time, you can temporarily (or permanently) revoke that privilege such that they are now responsible for the implementation of client’s technical SEO work.

If there seems to be a problem between the employee and one other particular person, that’s a different type of personnel issue that could be managed more collaboratively between you all.

How to Deliver a PIP to an Employee?

After you’ve completed the PIP, the next step is introducing it to the employee and then managing the outcomes over the following weeks or months.

Set up a one-on-one meeting with the employee in question. You should have already verbally warned them previously about their bad attitude and how it’s negatively impacting the workplace, so they should already be aware of the problem. Still, it’s important to be succinct and straightforward in communicating that the next step is implementing a PIP—and the consequences of not fulfilling it.

You can do that by focusing on the objective content and specific examples you’ve compiled. Set some periodic check-ins so both you and the employee have an understanding of how the PIP will be managed and how you will track their progress. Construct the improvement plan such that it is top of mind for the employee and they are charged with bringing to your attention the ways in which they are improving as well.

It is not uncommon that the employee may disagree with your assessment. You can use that as an opportunity to identify if they need personal or professional support they’re not currently receiving. However, be upfront that—regardless of anything they feel might excuse their behavior—there is a pattern that can’t be permitted to continue if they want to remain on the team. Finally, you’ll need to collect their signature so there is a record that they’ve received the plan and understand the expectations.

By submitting the form below, you can access a Google Doc of a Performance Improvement Plan Template that you can quickly download and duplicate for your own purposes.

Simply submit the form below to access a Google Doc with a complete Performance Improvement Plan Sample and a PIP Template that you can quickly duplicate and use today.

Building a successful marketing agency takes grit, a focus on your value, and sometimes a *loving* kick in the pants.

Needing an ally as you achieve your long-term goals?

I’d be happy to help. 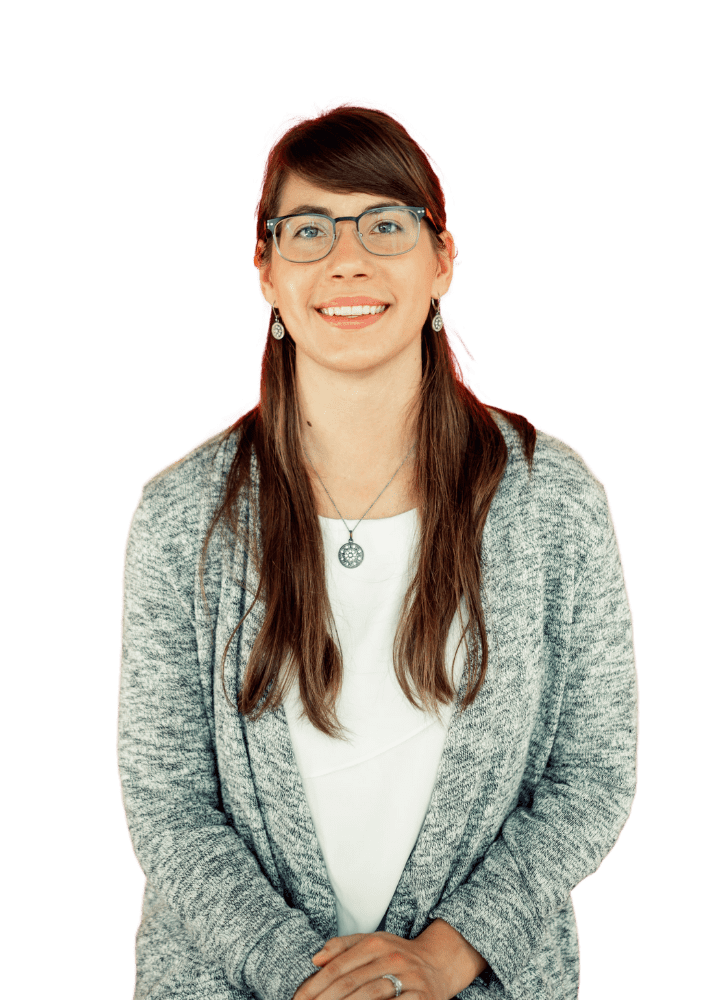 Other Great Posts about Building Leaders

Delegate, Dodge, Delete, Do: How to Get More Time Back In Your Day

Lessons Learned in Managing Teams Functioning as a Digitized Workforce

Transforming Your Company Culture and the Client Delivery Process

Perspectives on Business Development and Marketing Your Marketing Agency